Swirl flaps are small butterfly valves located within the inlet manifold on modern diesel and petrol engines, they are designed to help regulate the fuel to air ratio, improve emissions and help generate better torque at low engine speeds. At light engine loads the flaps close, causing the air to swirl into the combustion chamber, the swirling affect aids combustion and helps to improve emissions and generate more torque. After 2000 rpm the flaps are generally activated to a fully open position and have very little effect on engine performance and emissions. 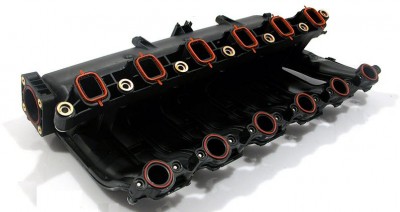 What are the problems?

Major Mechanical Failure:
Some vehicles, predominantly early BMW’s were fitted with metal flaps which were prone for failure, the metal screws holding the flap to the spindle would become loose and enter the combustion chamber causing catastrophic engine damage.

Leaking Manifolds
Overtime the seals surrounding the flap spindle brakes down and causes pressurized air from the inlet manifold to leak to atmosphere. Loss in boost pressure will cause a vehicle to run rich and can damage other components such as DPF, EGR, etc..

Carbon build up:
Carbon from the EGR system along with oil from the breather system causes carbon to build up on the flaps, this reduces the intake manifold size and can hinder performance.

Electronic actuators:
Modern manifold designs incorporate an electronic actuator which opens and closes the flaps. These actuators can fail, along with the position sensors, this can result in the flaps staying in the closed position and thus hindering performance, along with an engine management light and in some cases limp mode.

How do we remove them?

The process for removing the flaps depends on the design, in some cases the manifold is unbolted and the flaps physically removed, in other cases where the mechanical status of the flaps are good and the fault is due to an electronic actuator, the actuator function can be disabled and the flaps left in place.

What are the negatives?

In our opinion very little, the reduction in emissions and performance at low engine speeds is almost unnoticeable and would only be relevant if no carbon build up had occurred, due to the fact that carbon build up begins as soon as the vehicle leaves the factory, the removal of the flaps is likely to result in increased performance and efficiency.

What does it cost?

The cost of removal depends on the design of the manifold and flaps, contact us with your vehicle registration and we will be more than happy to offer a quotation.